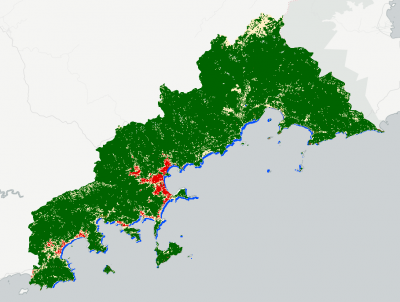 Ubatuba is a municipality sitting exactly where the eastern coast of Brazil is crossed by the Tropic of Capricorn. The city has a high record of nature conservation - 86% of its territory is composed of atlantic forest, which hosts one of the biggest biodiversities in the world. Despite attracting a number of people sensible to that context, though, the city is usually administered by people who regard preservation as an obstacle to “development”. For those people, development depends on industrialization.

Prisma has the long-term goal of stressing the relevance of socio-environmental innovation by building local capacity, retaining and attracting talents and creating critical mass for sustainable alternatives to local development.

The first iteration of Prisma, called CISA will be developed between July and December 2017 as a hybrid course composed of three basic modules:

We will start by shaping the syllabus and either producing or selecting relevant contents for these three modules, in brazilian portuguese. All the content produced, as well as selections or playlists of available third-party materials, will be published under a CC-BY-SA license.

The course will be offered for free to a small test group, probably six youngsters coming from a partner project of social engagement in local communities. Other possilities for test groups are students or former students from the two technical high schools in Ubatuba, or else members appointed by the collaborative incubator inc.ubalab.

The courses will simultaneously offer access to online content and discussions, and hold periodic face-to-face meetings with the test group, from august to november 2017. Meanwhile, students will develop their own project(s) of socio-environmental innovation, to be finished by december.

During the course of CISA, the students will create and document complementary learning paths relevant to their projects, and publish these paths also under a CC-BY-SA license. Depending on other funding sources of CISA, they will also be hired to transform these learning paths into new course modules. Some examples of possible new modules: permaculture, design thinking, circular economy, fundraising, web and digital media, event production, project management, free/open hardware, prototyping, graphic design (among many others).

The expected results of CISA are:

The central outcome expected of CISA (and Prisma as a whole) is to ensure that people with good ideas for socio-economic development are given the instruments and methodologies to put those ideas into practice in an open and sustainable way.

The syllabus for the basic modules will be published under open licenses. The idea is then to ask the feedback of advisors and partners of the project; as well as the opinion of activists and researchers working with digital culture, sustainability and circular economy, appropriate technologies and other relevant areas. The commented syllabus will be published online as well, becoming very important material for similar projects in the future.

The perspective and opinion of students about course contents will be treated as another source of insight, as well as the concrete impacts and eventual obstacles of their own projects during the period of implementing CISA.

Lastly, the acceptance and dissemination of online materials created for CISA will offer important indicators. This is a pioneer project, at least in portuguese language. We expect to attract a good amount of visibility with it.

CISA will benefit directly the small test group of about 6 or so students. It will also have indirect impact as the students choose their own projects to be developed during these six months. As the focus is on socio-environmental projects, there shall be positive impact from the projects themselves.

Ubatuba has an abundant nature (with the highest proportion of preserved territory in the State of São Paulo), a diverse population and centuries of history. The volume of in scientific publications that mention Ubatuba is remarkable when compared to the cities in the wider region around it.

On the other hand, there are pressing challenges. Unlike similar localities, Ubatuba can not become industrialized in the traditional way, due exactly to the predominance of its preserved areas. In the imaginary of most of its political and higher economic classes, though, preservation equals underdevelopment. The city must find alternative paths. Otherwise, the regulations will be changed. There is no University in Ubatuba, what adds a constant drainage of young people along with their skills, talent, creativity and desire for action. Those who stay fall prey to an economy dependent on heavily seasonal mass tourism and construction work.

The biggest challenge CISA might face would be if talented young people, inventors and innovators from Ubatuba don't get interested in what we have to offer. Becoming part of an international network of like-minded project is already a way to overcome the prejudice people often have against local initiatives. CISA envisions a number of local partners that will not only help making the project known by potential participants, but also point to particularly talented individuals, creative projects or specific demands that could benefit from its implementation.

Prisma (and CISA within it) is one of the outcomes of Ciência Aberta Ubatuba, a two-year research project on open science in Ubatuba, member of the OCSD network, coordinated by IBICT and funded by IDRC. Ciência Aberta Ubatuba was presented in the 4S/EASST conference in Barcelona 2016, as well as ESOCITE Curitiba 2016. The experience will be shared as a chapter in an upcoming book on open science organised by OCSDNet.

Felipe Fonseca was responsible for the local activities of Ciência Aberta Ubatuba: mapping the institutions, researchers, activists and other actors involved with the production and circulation of knowledge, organising events putting them together with other social contexts from Ubatuba, Brazil and abroad. This experience made him sure of some previous assumptions. In particular, the size of the gap created by the lack of any Universities in Ubatuba. The long-term plan to Prisma is to fill that gap by retaining and attracting talents as well as investments into socio-environmental innovation. Felipe also had a number of other experiences in between arts, science, technology and society during the last 15 years: creating and producing four editions of the Tropixel international festival since 2013; teaching at a public technical school in Ubatuba; working for two years with identity and PR for two communities of traditional cultures in Ubatuba (a tribe of native brazilians and a quilombo, remaining settlement of former slaves); researching labs of experimental digital culture for the brazilian Ministry of Culture, the Spanish Agency of Cooperation AECID, and a Master's at Unicamp (University of Campinas); developing and implementing a digital culture strategy based exclusively in free/open software and contents for the network of 2000+ Pontos de Cultura in Brazil; co-creating and articulating the Metareciclagem and Bricolabs networks.

How open is it?

CISA is conceived as a project of open education. It will make use of available open educational resources when possible, and always use open licensing (CC-BY-SA) for its own content - from playlists and lists of selected materials to multimedia content produced for the modules.

The students will be asked to document their learning, findings and experiments online under open licenses.

Prisma and CISA are being built with a sense of resilience. The recent years in Brazil have reminded us never to trust a single funding source, as budget cuts have hit culture and science even harder than other areas.

The mid-term plan is to structure Prisma as a hybrid of community organisation and social business that generates revenue in many ways (seling certified courses, offering face-to-face immersions, creating educational content, developing in-house training and so on) and reinvests all the profit into itself. To reach that point, it will need to rely for now in a range of funding sources - donations, paid writing and speaking, establishing partnerships with organisations, possibly crowdfunding and other strategies. If you want to help us start, we are accepting donations already.